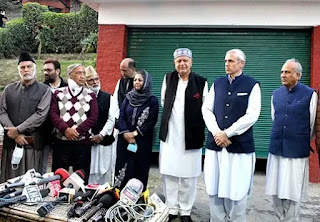 SRINAGAR: A very important meeting of Gupkar Alliance is going to be held today in which more than 150 leaders of all the parties in the alliance have been invited:

The meeting will begin at 11 a.m. at Dr. Farooq Abdullah’s Gupkar residence. The leaders of National Conference, PDP, CPIM, Awami National Conference and People’s Moment will review the current situation in Jammu and Kashmir and work out a plan of action for the future.

Coalition spokesman Muhammad Yousuf Tarigami was quoted as saying that the current situation in Jammu and Kashmir would be taken into consideration in the meeting, especially the opinion of the second line leaders regarding their participation in the next meeting of the delimitation commission.

The last meeting of the Alliance was held on August 4. The alliance was formed in October last year to restore the special status of Jammu and Kashmir, which was canceled by the Center on August 5, 2019.