Gupkar Alliance meeting passes resolution The position of August 4, 2019 should be restored 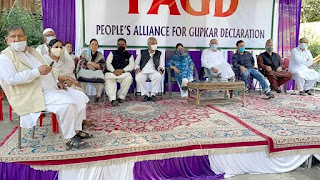 SRINAGAR:- (Daily AMV Tribune) Gupkar Awami Ittehad has declared the decision to repeal Articles 370 and 35A of the Constitution of India unconstitutional by declaring the ban on media, intimidation of government employees, continuous executive orders imposed on the people of Jammu and Kashmir after August 2019 as dictatorial:

Declared. In a meeting held at the residence of Dr. Farooq Abdullah on Tuesday, it was said that the state status should be restored and the constitutional position should be restored. It is said that the legislation to divide the historic state into two Centrally Administered Territories of Jammu and Kashmir and Ladakh has created a huge political vacuum and uncertainty. “It is extremely unfortunate that a judicial challenge against this repeal as a violation of the Constitution is still pending before the Supreme Court two years later,” the resolution said. Freedom and democratic rights continue to be under pressure.

Democratic rights continue to be attacked under strict laws such as the UAPA and the PSA, while hundreds of people are being held without charge. The resolution further said that new orders are being issued for denial of passports and government services to those involved in “law and order” or “stoning cases” while denying the principle of natural justice that a police report is a crime. Declare and deny the provision of all these services. The law indicates that everyone is innocent until proven guilty. The resolution said that by disqualifying the status of permanent residents of the former state, the protection of jobs and land rights has been arbitrarily taken away, further deepening the sense of insecurity in the areas and communities.

Referring to the economy of Jammu and Kashmir in the resolution, he said that the economy of the region was deteriorating day by day as the government’s big promises of development, investment and employment were gone. ‘Instead of creating new jobs, daily wage earners, casual laborers, scheme workers and other contract employees are either not getting regular wages or are being denied their wages altogether. Agriculture, horticulture, tourism, handicrafts, transport and other sectors are in deep crisis. ” Intimidation, discriminatory employment laws and continuous executive orders after August 2019 are dictatorial dictatorships imposed on the people of Jammu and Kashmir, ”he said. Employees in general have created a fear psychosis while local officers are being sidelined and the state cadre eliminated people.

The resolution said that the relentless killings of people, including political activists in Kashmir, misunderstood the government’s claims of peace and normalcy. The meeting vaguely condemned the killing of unarmed people, including political activists. The resolution passed made it imperative that the people of every region and community of Jammu and Kashmir remain united and not fall prey to false campaigns and attempts to further divide and weaken them. Coalition parties say there is strong dissatisfaction not only in Kashmir, but also in Jammu and Ladakh with the effects of the undemocratic approach adopted by the central and local administrations. The resolution added, “People from all parts of the former state have started questioning the BJP’s claim to ‘New Kashmir’ while people want to know that they have destroyed the vision of New Kashmir.” What has been achieved by doing what was prepared by the people through a hard and long struggle against the sovereign government and the feudal lords. The resolution said that during the meeting with the leaders of Jammu and Kashmir in New Delhi two months ago, nothing special came to light after the Prime Minister’s slogan of “distance of heart and distance of heart”. He said that confidence building measures were not taken to provide some relief to the distressed people of the area. The indiscriminate use of laws must be stopped.

The future of the youth is in jeopardy: Dr Farooq

Srinagar: (Bilal Furqani) National Conference President Dr Farooq Abdullah has said that parliamentary and constitutional rights have been snatched from Jammu and Kashmir and the basis on which Jammu and Kashmir was annexed to India has been withdrawn. Addressing a meeting of Gupkar Alliance, he said that he talks of winning the hearts of the Prime Minister of India, but he does not win hearts with sticks. “I am saddened by the fact that our identity is at stake, our interests are not secure and the future of our new plant, new generation and youth is in jeopardy,” he said in a depressed tone. “Who are our enemies that we can’t even talk, we have never spoken against the country,” he asked. The National Conference president said he had no right to know about Jammu and Kashmir. Isn’t it? He said, “What is our condition, where have we reached, where have the prices of gas and petrol reached, do we not have the right to know about the state?” We are not allowed to speak, and when they speak they are called Pakistanis. Accusing the central government, he said that they wanted to overthrow the Constitution of India. He said, “This country has no friends, Nepal, Bhutan, Bangladesh, Sri Lanka are all enemies, and if we say so. If so, do they lie? They want us to close our eyes and prostrate before them. We only prostrate before Allah. ” Referring to the parliamentary standing committees that visited the valley, he said that the members of these committees are followers of the government.

Dr. Abdullah said, “The chairman of the parliamentary committee told us that the parliamentary committees that have come are followers.” Farooq Abdullah said that the number of unemployed has increased in Jammu and Kashmir and local youth have been neglected in construction projects. is going. “The graph of unemployment has gone up, the literate people are unemployed, people are brought in from outside for construction work, what are our youth not capable of,” he said. He called on the workers to prepare for the exams and inform the people about the difficulties

Policy of bullying and pressure on Kashmiris continues: Mehbooba Mufti

Srinagar: (Bilal Furqani) PDP President Mehbooba Mufti said that PSA is waiting for those who tell the truth. Addressing the meeting, Mufti said that there is a lot of pressure here and only unity can get rid of this pressure which is the need of the hour. PDP President said, “We are facing a lot of pressure. When are they fighting but this is the time for unity. ”Addressing the leaders of the alliance, Mufti said,“ If you want people to get out of all troubles, you have to unite, all eyes are on us. He warned that there was an attempt to create confusion and misunderstanding.

He said, “Many workers were misled by some elements who called me to say that they had canceled today’s PAGD meeting.” Mehbooba Mufti alleged that BJP members are allowed to meet without any restriction. He said that his party had recently organized a youth convention in Bandipora but we were being prevented from doing so by one excuse or another. Article 370 will not come back, they do not believe in Allah Almighty. He said that hope should not be lost. Mufti said that Article 370 had secured our land and jobs, but now outsiders were conducting raids. “You can see how outsiders have controlled sand mining contracts,” she said. The former chief minister said that recently in Pulwama, the police had lashed out at local sand contractors for protecting the interests of outsiders. Has returned He said that BJP was pursuing policies which were difficult to understand.

Mehbooba said that one day the Prime Minister says that he wants to win the hearts of the people in Kashmir and the next day some of his lieutenants threaten the Kashmiris. Mehbooba Mufti said that Kashmiris are being silenced at gunpoint. She added, “Kashmiris are shocked, they cannot express, PSA is waiting for truth tellers, journalists are being harassed.” Yes, they are being arrested, they are being denied passports.