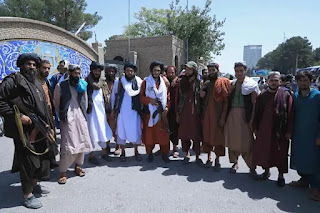 With the Taliban occupying more than half of Afghanistan’s provinces, the question is being raised as to how the government will operate if the Taliban take over Kabul:

In other words, just as in a democracy there is a president, a prime minister and a cabinet, what will be the structure of the Taliban government?

In the same way, we will try to answer this question in this report that the Afghan Taliban How the government was formed from 1996 to 2001 after the occupation of Kabul and what is the method of Taliban-style government in a democratic system in which the people are consulted through voting. The Taliban have won 22 of Afghanistan’s 34 provinces. The provincial capitals have been captured and fighting is still going on in other provinces. The Taliban have also taken control of Logar province, about 70km from the Afghan capital Kabul, and because of the province’s proximity to Kabul, observers believe the province is crucial to capturing Kabul.

Almost all the provinces adjoining Kabul are now under Taliban control. An unidentified surveillance plane was also spotted on the main highway from Logar to Kabul last night. It could be seen on a website called Flight Radar that a surveillance plane with no further details on the flight radar was constantly circling over the highway from Logar to Kabul, which remained there until morning. It did not say what country the plane belonged to or whether it was really monitoring the highway. Similarly, the Taliban have taken control of almost all the provinces in the north of Afghanistan and are now keeping an eye on the southern and western provinces. According to the Afghan government, they are trying to stop the Taliban advance in various provinces. A meeting chaired by President Ashraf Ghani in Kabul yesterday decided that Afghan security forces would put up strong resistance against the Taliban and try to stop their advance.

How will the Taliban form a government?

Islamabad-based Tahir Khan is an expert on Afghan affairs and the former Taliban government. Have a closer look. He was asked how the government was formed when the Taliban took over Kabul in the 1990s. In response to this question, he told Independent Urdu that after the occupation of Kabul, there were two types of system in Afghanistan. One of them was called ‘Emirate’, meaning Mullah Omar, the head of the Taliban, headed it and he was called Amir al-Muminin. ‘ (That is, Mullah Omar’s edict was important in relation to various government decisions). At the time, the responsibility was given to Taliban leader Mullah Rabbani, who had the status of prime minister and was accompanied by his aides and cabinet. If the Taliban took over Kabul, how could they form a government? Will you In response to this question, Tahir Khan said that the Taliban insist on the Islamic Emirate and the Qatar agreement does not mention the name of the Taliban but the Islamic Emirate of Afghanistan.

Shamim Shahid, a journalist based in Peshawar who monitors Afghan affairs, told Daily AMV Tribune: “Taliban parliamentarians were also selected on the instructions of Mullah Omar and removed on his orders,” he said. The National Assembly of Afghanistan is called the Loya Jirga (House of Elders) and the Provincial Assembly is called the Ulsi Jirga (House of Peoples). He held jirgas with the ulema and consulted with them, just as the ulema were consulted on the issue of Osama bin Laden, and the Taliban consulted with the ulema after 9/11. The Taliban took control of Kabul.

What to do next?

So far the Taliban have taken control of the capitals of 22 provinces of Afghanistan. “Given the Taliban’s policies in the current situation, there is a strong possibility that the current Taliban leader, Sheikh Habibullah, will be elected ‘Amir-ul-Momineen’, while the Taliban’s leadership council may be elected,” Khan said.