Jammu and Kashmir should be given the status of a complete state again: Rahul Gandhi, Modi has deprived the Kashmiri people of their democratic rights for the last three years 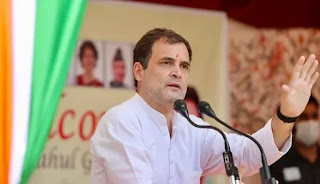 SRINAGAR:- (Daily AMV Tribune) Congress General Secretary Rahul Gandhi has said that Jammu and Kashmir should be given the status of a full state again, urging the Indian government to hold transparent and fair assembly elections as soon as possible so that the region:

Rahul Gandhi alleged that although Tamil The entire country, including the states of Nadu and West Bengal, is under attack by the present Indian government, but according to him, these states and territories are under indirect attack, while Jammu and Kashmir is under indirect attack from New Delhi. He has supported the demand of Kashmiri parties to give Kashmir the status of a state and to hold free and fair elections for the State Assembly, but they have supported Article 370 of the Constitution of India under which Jammu and Kashmir is special in the Indian Union.

Status and section 35A, which guaranteed special powers and rights to the real inhabitants of Kashmir He said that the tradition of brotherhood, love and respect among the people of Jammu and Kashmir is centuries old but these attributes are a part of their daily life and their strength. Therefore, whatever is done for them should be based on the principle of love and respect. Without naming the ruling Bharatiya Janata Party of India, he said, “If you start hating the people of Jammu and Kashmir, you will Nothing will come of it.