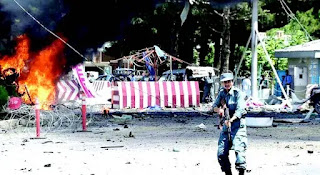 KABUL: Afghanistan At least 100 people have been killed and more than 150 injured in a series of bomb blasts at Kabul airport in the Afghan capital, Kabul:

ISIL has claimed responsibility for the Kabul airport bombings, according to British media reports.

The first blast at Kabul Airport was a suicide bombing at the airport’s Abbey Gate, killing American and Afghan civilians.

The second was at the Baron Hotel, a short distance from the Abbey Gate. Many people were injured in the incident.

The Baron Hotel is a place that Western countries were using to evacuate their citizens. Meanwhile, Taliban spokesman Zabihullah Mujahid said that five explosions were heard overnight even after the attack on Kabul airport.

The Taliban leader blamed the US for poor security at the airport and said the security of the airport was the responsibility of US personnel. There was a pass that failed to protect the people.