Not even the right to protest, jail sectarian attack on brotherhood: Mehbooba 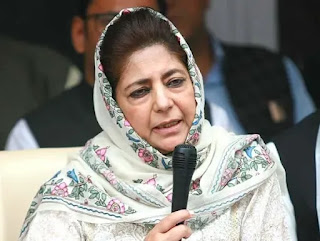 Speaking to reporters on the sidelines of a function held at Mandher Post Bungalow, Mufti said that the Central Government had declared Sections 370 and 35A as an impediment to the impediment to development in Jammu and Kashmir.

Mehbooba Mufti said, “Everywhere I meet people, they are complaining. The condition of roads is bad.

The condition of electricity is also bad. Unemployment is the biggest thing.” He said that during the tenure of Mufti Muhammad Saeed, millions of educated youth got employment through Rahbar-e-Taleem Teacher Scheme, then employment schemes like Rahbar-e-Sahat and Rahbar-e-Zaraat were introduced but today nothing is visible.

Mufti said, “Our state has an unemployment rate of 18.5 per cent, which is higher than in the country, which is different from before when Article 370 was in place.” He said that section 370 not only protected the identity of the people but also our lands, jobs and everything.

The PDP president said, “At the same time, I see that the brotherhood here, Hindus and Muslims, live together. They want to come, they want brothers and sisters to fight among themselves, they want to make Gujar-Pahari, Kashmiri. If you want to do gujar, then it is not right and I think it is not going to get anything, if you talk, they will catch you and take you away.

He said, “If you have to go somewhere, they lock you from outside, close the gate, so what can we do? You can use your tongue, you can use a pen, there is no question of protesting.” ”.

“Now you see in the country, where the worst situation is, people have the right to protest, here they don’t even allow you to protest, if you want to protest peacefully against something, they don’t allow it,” he said. , And close their eyes whenever their heart desires.