PTI government in AJK has fallen victim to differences, with senior minister Sardar Tanveer Ilyas deciding to resign from his post 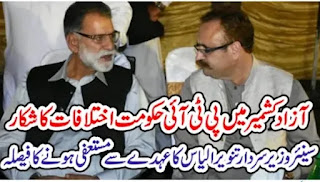 According to sources, senior minister Sardar Tanveer Ilyas has started considering resigning as soon as possible after consulting his close associates and will soon resign from the post of senior minister.

It may be recalled that in the 2016 elections, Pakistan Tehreek-e-Insaf (PTI) had won two seats in the Azad Kashmir Assembly. Khan had joined hundreds of important personalities day and night in the PTI and played a key role in the PTI’s success in the state assembly elections. Earlier, Sardar Tanveer Ilyas Khan was considered a strong candidate for the PM’s job.

Member Sardar Abdul Qayyum Niazi had surprised everyone by mentioning his name. It may also be recalled that in the recent elections in Azad Kashmir, Sardar Tanveer Ilyas’s aunt Begum Shahida Saghir has also won, who has been made the Minister for Social Welfare and Women’s Development in the new cabinet.