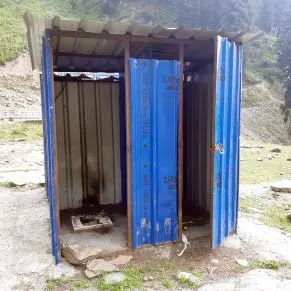 Mendhar:  The public sheds built on the Mughal Highway connecting Pir Panchal region with the valley have disappeared within two years of construction while water and other basic facilities are not available in the toilets:

Passengers criticized the management The Jammu and Kashmir administration had constructed public sheds and toilets at several places on the highway two years ago in view of the difficulties faced by the commuters, but substandard equipment was allegedly used in the construction of these public sheds.

Within years, they have disappeared from the ground. He said that due to substandard construction, heavy snowfall and strong winds in the area, there is not a single shed on the ground. He said that along with the sheds Toilets were also constructed in many places, most of which have disappeared, but some are not yet available, but there is no water facility in them, due to which travelers, especially women, are facing severe difficulties.