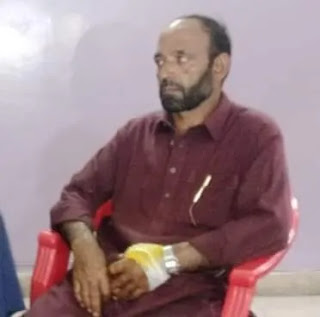 According to details, Raja Farid, a resident of Gharthama, Kharosa area of Chinari, filed a petition against his real son and two relatives at Chinari police station yesterday.

In which a man named Farid was of the view that his son was reunited with his uncles and my wife was not allowed to settle down. Nazir Kayani was taken into custody and taken to the police station. Jamil Kayani while talking to Chinar Kashmir News last night said that without asking us any reason, SHO Chinari and other police personnel tortured SHO Due to the violence, my left thumb has been broken while my elder brother Nazir Kayani There are clear signs of torture on the legs and other parts of the body. We are poor people.

The way we were brutally tortured is a legal crime. G has demanded from Azad Kashmir to take notice of the violence by SHO Chinari and other police personnel and provide justice to us. He further said that we are poor and helpless people and we will be pressured to end the matter but we demand IG Azad Kashmir to provide us justice so that no future police The officer / official could not dare to torture any poor and oppressed intoxicated with power.

Jamil Kayani further said that after the torture we were illegally detained and after many hours of detention tell us this. It was left to do nothing like this in the future.

Who is a fool to destroy the house of his mother and his sister The authorities will conduct a high-level investigation into the incident. The facts will come to light.

When a local journalist called SHO to know his position in this regard, SHO Chinari took the position that his son When asked why he was harassing the father, the son said that the father was insane and used other wrong phrases about his father.

It is not allowed and it is not allowed in Islam. Police officers round up the question of violence. Here the question arises that if the son was using vulgar language against the father, does the law allow the police to torture him? Besides, what was the fault of the two relatives of the petitioner?

Why were they brutally tortured? If these three have really committed any crime, then why were they released after being kept in custody for a few hours