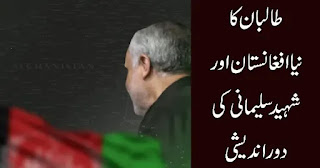 The Afghan government and the Taliban appeared at the negotiating table in Iran before the Taliban took over Afghanistan:

After the occupation, after the participation of Taliban leaders in mourning ceremonies in Muharram and the meetings of Shiite scholars in Kabul, the question of what is the nature of relations between Iran and the Taliban and what will be the future of these relations? Syed Mohammad Marandi, head of “American Studies” at Tehran University, says that after the defeat of the Taliban in Afghanistan 20 years ago and the complete withdrawal of support from Pakistan and Saudi Arabia under US pressure, Iran’s Quds Force Began talks with the Taliban, at which time many thought it was a futile effort, as the political landscape throughout the region was changing dramatically.

Iran had also not forgotten the killing of 11 Iranian diplomats and a journalist inside the Iranian consulate in Sharif. The Taliban were defeated and the rest of the forces fled the country, Iranian allies took key positions in the Afghan government, and there seemed to be no need or justification for talks with the almost extinct force (the Taliban).

General Qasim Soleimani believed that the Taliban had infiltrated Pashtun tribes and settlements in southern Afghanistan and parts of Pakistan He enjoys popular support among a large section of the population and feels that mutual understanding is essential for long-term regional stability.

General Soleimani also believed that the only force that could harm the US occupation in such a situation was the Taliban. One of Iran’s main strategic objectives was the Taliban.

He knew that under such circumstances, the occupation of both Iraq and Afghanistan would gradually become very disturbing and unpopular in the West, and that such a heavy burden would ultimately weigh heavily on Western economies.

It will force the withdrawal of its forces from both countries. Iran’s Quds Force aimed to build mutual understanding and encourage moderate factions within the divided Taliban to gain the upper hand. General Soleimani believed that it was inevitable that foreign forces would be forced to leave the country at some point, and that, as in the past, it was necessary for the country to return to civil war after the end of foreign occupation.

Don’t go 2011 was a turning point in relations, when high-level Taliban delegations began a visit to Tehran. As time went on, the relationship became deeper and more personal.

Such strong ties that when General Soleimani, Abu Mehdi al-Mohandes and his associates were martyred at the hands of the Trump administration at Baghdad International Airport, a high-level Taliban delegation visited Tehran and met with Soleimani in Tehran. The house also offered condolences to his family. However, allegations of Iranian military support for the Taliban against Afghan government forces are completely baseless. Both Iranian intelligence and the Taliban knew that US-linked factions within the rapidly disintegrating ISIS had been driven out of Syria and into Afghanistan. The Taliban asked the Sipah-e-Quds Force to play a key role in defeating it, as Iran itself sees it as a living threat.

Iran informed the Afghan government, which was not particularly pleased with such cooperation, but did not object. Eventually, the Taliban made four promises to the Al-Quds Force. Will maintain stability on the border with Iran. Will not compromise on opposition to the presence of foreign forces. It will not target ethnic groups or sects. The brothers will not kill the brothers. Although there are different groups within the Taliban with different ideologies, the Iranians have guessed that the current Taliban leadership has kept its promises during these years. These ties have also helped the Islamic Republic of Iran become an effective mediator in recent weeks and months, ensuring that the withdrawal of occupying forces does not lead to civil war and that the new government includes all Afghans.

Encourage. Iran has strong grounds to believe that the sudden withdrawal of Western forces was designed to destabilize and destabilize Afghanistan. When the Afghan government and the Taliban were called for talks, the Taliban rejected Turkish mediation and instead accepted Iranian mediation. The United States believes that if it does not have Afghanistan, it will become a source of constant concern for Iran, China, Russia and even India.

Meanwhile, Saudi Arabia and two other regional powers are sending large sums of money to support extremist takfiri factions within the Taliban. Iran is constantly working and working with various parties inside Afghanistan, as well as with neighboring countries, including China and Russia, to stop their efforts.

Martyr General Qasim Soleimani is no longer with us, but his policies for the region and his martyrdom against American domination are still being implemented with full vigor.