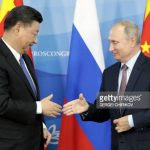 Leepa Valley,  by Anas Khawaja (Azadi Times): China has vowed not to join Western sanctions on Russia, saying its effects on China would be limited, according to a Reuters report. Will not be part.

Earlier, China had refused to condemn Russia’s attack on Ukraine, saying the sanctions were “illegal and unilateral.” It is a matter of financial sanctions, we do not approve of them, especially sanctions imposed unilaterally because it will not improve and it has no legal status, “he said.” We are involved in such sanctions. No, we will continue our normal economic and trade exchanges with the parties concerned.

It should be noted that China and Russia, especially in recent years, have come very close in relations, including trade partnership. According to Chinese customs data, trade between the two countries increased by 35.9% last year and reached a record 6 146.9 billion. Oil, gas, coal, and agricultural commodities are important products in China’s trade with China. Referring to the strengthening of China’s economy and financial sector, he said, “In the future, it will not have much impact on China as a whole.” The sanctions were aimed at limiting Russia’s ability to trade in dollars, euros, pounds and yen.