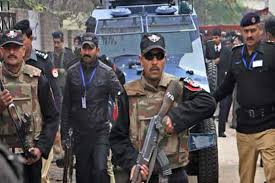 Kotli (Azadi Times): On the orders of Inspector General of Police Azad Kashmir and Deputy Inspector General Mirpur Region Dr. Khalid Chauhan, on the special instructions of SP Kotli Mohammad Riaz Mughal, under the supervision of DSP City Farooq Ahmed, SHO City Police Station Kotli Shehzad Chaudhary conducted a grand operation against dangerous suspects arrested Arms and Ammunition Recovery
According to the details In the murder case of Malik Aziz Khan, who was killed in Panjira Shapur in the past few days, two named chief accused Muhammad Maruf and Zain Mehboob, residents of Nali Oudhe Panjira, were a big challenge for the police.
On which SHO City Shehzad Chaudhary along with Abdul Ghaffar ASI Muhammad Jameel IHC Chowki Officer Muhammad Bostan DFC Hasnain Khan under the police force and searched the house of the accused by obtaining a warrant and searched the house of the accused with 2 Kalashnikov along with 4 magazine 55 round live Kalashnikov 1 Rifle 44 bore magazine 10 rounds 2 rifle 12 bore barrel 1 rifle 12 bore bore 2 pistol 30 bore 2 magazines 10 live rounds 2 barrels 30 bore recovered.
SP Kotli Muhammad Riaz Mughal while talking to the media said that the accused were carefully The series of raids is continuing, all possible measures will be taken to protect the life and property of the citizens, and strict action will be taken against the criminal elements.