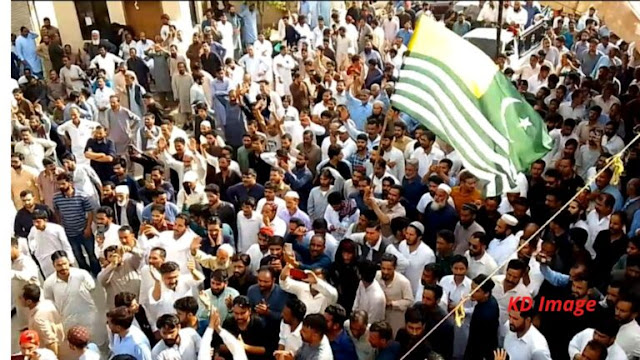 This protest continued for two weeks had demanded from the government that Azad Kashmir (Pakistan occupied) should be exempted from load shedding, refrain from passing the 15th Amendment, Tourism Act, abolish taxes, privileges of judges, parliamentarians, client officers in electricity bills, The captives arrested during the protest should be released and the subsidy on flour should be restored.
During this protest camp, traders and transporters in Poonch Division also called for shutter down and wheel jam strikes, on which shutter down and wheel jam strikes were held on fixed dates. A government committee came to Rawalakot about two weeks ago to negotiate with the forum and the first round of negotiations failed.
Later, during an all-party conference held in Islamabad, the Prime Minister of Azad Kashmir announced the release of the arrested persons and the closure of the cases. Sardar Faheem Akhtar Rabbani who is MLA from Poonch came to Rawalakot and held talks with the forum and a written agreement was reached between the two parties, which ended the protest sit-in after the release of all the captives.
Addressing the closing program, Forum President Sardar Zahid Rafiq said that if the agreement is not implemented within two months, then they will stage a dharna at the same place.
All the people against whom the cases were registered during the protest in Poonch district yesterday were released, and seven prisoners were released after completing all the necessary accessories, it should be clear that load shedding, taxes and Cases were filed against those protesting against other demands, they were accused of blocking roads, damaging property, etc.
Cases were filed against a total of 27 people, out of which 24 were arrested. were transferred, of which sixteen persons had already been released and on the previous working day If the captives were also released, they were brought in a procession to the protest (dharna) organized by the People’s Rights Forum in Rawalakot courts where they were given a warm welcome.