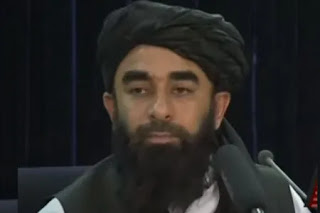 Daily AMV Tribune: Talking to senior journalist Saleem Safi on private TV, Taliban spokesman Zabihullah Mujahid said that Afghan Taliban leaders Have repeatedly made it clear that Afghan territory will not be used against anyone TTP must obey the Afghan Taliban.

Zabihullah Mujahid said that if the Pakistani Taliban consider the leader of the Afghan Taliban as their leader, they will have to obey him because if the TTP has pledged allegiance to our Amir al-Muminin, they will obey him even if he Whether they like it or not, Amir al-mu’minin has repeatedly stated in his edict that he will not use our land against anyone else.

That the TTP should be told by Amir al-mu’minin not to fight against the government of Pakistan? To which Zabihullah Mujahid said that this is a long debate.

I think this is the issue of Pakistan and it should be that the Pakistani people, Pakistani scholars and Pakistani circles should come up with a plan of action in this regard because this issue is not ours.

He said that this issue is not of Afghanistan but of Pakistan so Pakistan should make its own strategy and decide whether it is permissible or not and did not leave out the factors of justification. He said that there are some places on the long Pak-Afghan border where They do not have access.

After the formation of the government, the Taliban government will create a mechanism in this regard. It should be noted that the spokesman of the Afghan Taliban also said that the US should have informed us before the air strike, the drone strike is an attack on Afghan soil, the drone strike killed 2 people, 2 women and a child were injured.

The Taliban said that the US drone strike in Nangarhar was reprehensible and Kabul airport would soon be under full Taliban control. It is too early to say whether Turkey or Qatar will help with airport security.

There are adequate technical and security staff for airport security, a spokesman for the Afghan Taliban said. What is happening is that the United States, Britain and other European countries should restore diplomatic relations with Afghanistan.

Russia has done a great loss to America