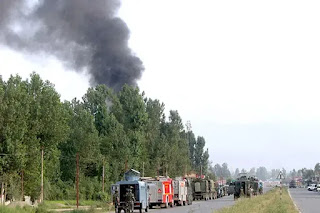 ANANTNAG:-  Militants attacked a BSF convoy at Mullahpura Mir Bazaar in Qazigund on Thursday. Although no one was injured in the attack, the forces immediately cordoned off the area and cordoned off the militants, after which an armed clash ensued:

An operation against the militants was stopped late in the evening but additional reinforcements of the forces were deployed in the surrounding areas. Militants opened fire on a BSF convoy heading from Jammu to Srinagar near Mullapura Mir Bazaar around 1.30pm on Thursday, but no one was reported injured in the incident. Meanwhile, security forces cordoned off the area. After which the militants were trapped in a warehouse and an armed clash broke out between the two sides during which one officer and two civilians were injured. Forces personnel launched an extensive operation against the militants trapped in the building. Amish Singh son of Prabhu Singh resident of Jharkhand was injured. It is learned that 25-year-old Sahil Yaqub Butt son of Mohammad Yaqub resident of Dantar Anantnag and 22-year-old Shahid Farooq son of Farooq Ahmed Sheikh resident of Laram Ganjipura Kulgam were injured in the exchange of fire and have been shifted to hospital. It is said that two or three fighters may be present here.

Police said in a tweet after the incident that the militants attacked the BSF convoy on Jammu-Srinagar highway but no force personnel were injured in the attack. According to the police, Police officials also reached the imports, after which the police also reached the imports. Victor is monitoring the operation along with the force. As soon as the clash started, vehicles were stopped at Qazigund and Khanna Bal on Srinagar-Jammu highway, leaving hundreds of small and large vehicles stranded on the highway. According to sources, the operation against the militants was stopped late at night but additional reinforcements of the forces were deployed in the surrounding areas to prevent the militants from fleeing.

The search operation launched by the security forces in. Thana Mandi sub-division of Rajouri district has entered its seventh day but no further progress has been made in this regard. The search for the militants has been continued, he said. He said that along with Bhangai, Dera Ki Gali, Manial, Mangota, Azmatabad and other areas have also been brought under the ambit of the operation. A search operation was launched after which two militants were killed in the clash. However, security agencies said that at least one militant escaped or was present in the area during the clash. A hand grenade was also recovered from the security forces on Wednesday. Official sources said that the search operation by the army and police has been continued while the scope of the operation has been widened.