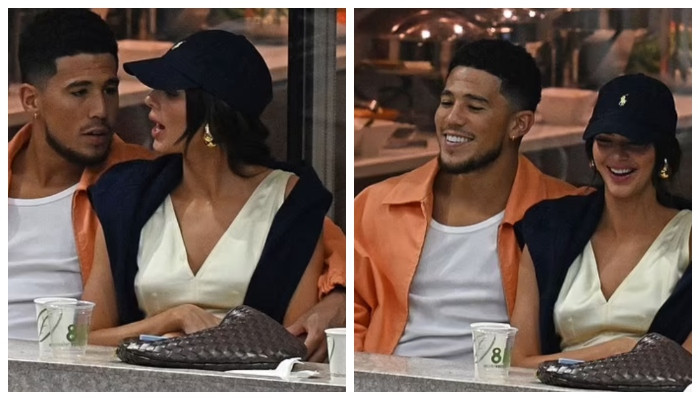 
Kendall Jenner and her beau Devin Booker can’t seem to keep their hands off each other after they stepped out to watch the US Open Men’s Finals tennis match in New York.

On Sunday, the duo appeared to be in good spirits as they dressed casually for the anticipated event and at one point, the reality star was seen resting in the arms of her beau.

To note, the two lovebirds recently split earlier this year between June, but quickly rekindled their relationship last month in August.

The Keeping Up With The Kardashians alum kept her look stylish and elegant as she attended the tennis match at the USTA Billie Jean King National Tennis Center.

She opted for a cream-colored satin dress that was comprised of a deep V-neck and fell down towards her ankles and looked smashing as ever.

The beauty was all smiles as she sat closely next to Devin as they watched the game in good spirits.

Meanwhile, her beau, who is known for playing with the NBA team, the Phoenix Suns, opted for comfort for their casual date. Devin wore a plain white T-shirt and added an orange, long-sleeved jacket on top.

It seemed that the stars couldn’t stay apart for long, and were seen hanging out together in July at the Hamptons.

Last month in August, an insider confirmed to Us Weekly that Kendall and Devin have rekindled their relationship.

‘Kendall and Devin are 100 percent back together,’ the source close to the two stated, adding ‘They spent some time apart but are back to a good place and are really happy with each other.’

The entire crusher plant in the garden will be sealed