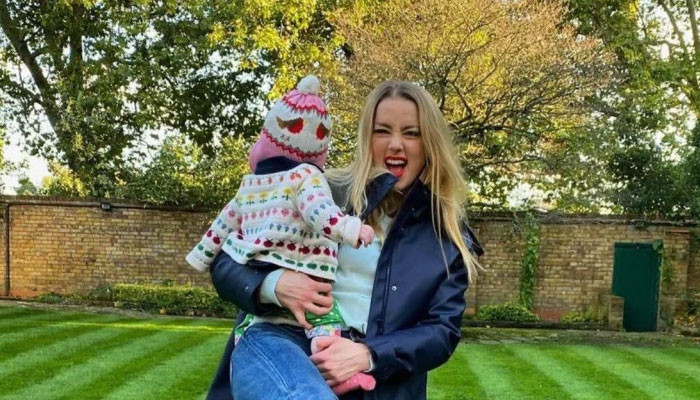 Amber Heard has received a lot of backlash for having a shockingly ‘calm’ baby that could “only have been sedated” after not being seen “squirming around” in the stroller.

The rumors started flying in once Heard was papped working in the streets of Israel alongside Eve Barlow and a stroller, carrying her daughter Oonagh.

This comes shortly after baby Oonagh Paige Heard’s identity was questioned by fans that suspect she isn’t real and is just a rented baby.

For those unversed, many have even accused Amber Heard of ‘being abusive’ and ‘forcing’ Eve Barlow to ‘cut her food’ to ‘appease’ Amber Heard.

The first question came from a social media user who simply couldn’t wrap their heads around a 17-month-old baby lying in a small stroller, without ‘making any fuss’.

The user wrote, “My question with this photo of Amber pushing the stroller. Her daughter would be too big to be in the lay-down type stroller like this. Her baby would be almost 17 months old. So what’s really in that stroller”. (sic)

Another questioned why Heard has only been seen pushing strollers and never holding her baby girls ‘like other celebs’, “Yet magically not one pic of her and her daughter out in public…”

“Only pics ever put out are total photo ops that look like they paid to get or she posted in IG. We see celebs with their kids photos all the time and somehow shes never been caught out in public with hers?” (sic)

However, it was a separate netizen that sparked a major debate with their questions, “Is it me?” the user wrote. “That stroller couldn’t possibly be carrying a toddler.”

“You can’t even see a baby’s head, hands or feet. Unless that baby’s sedated, I’ve never seen a toddler be so still and unnoticeable.” (sic)

This comes amid months of ridicule and accusations against Heard, many of which include accusations of ‘abusive’ behavior and ‘forcing’ Eve Barlow to ‘appease‘Amber Heard.