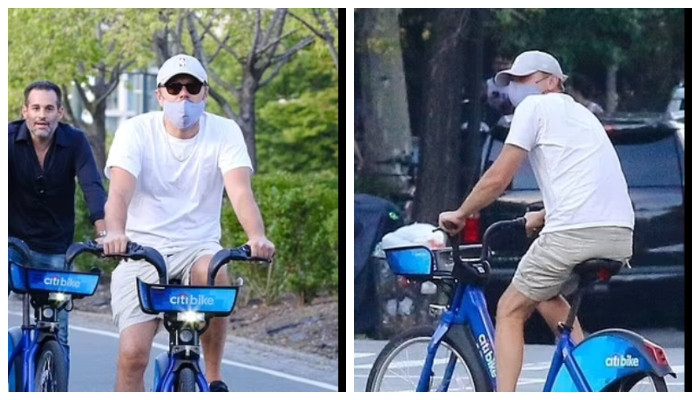 Leonardo DiCaprio put on a cozy display during an NYC stroll on Saturday.

The 47-year-old Oscar-winning actor looked casual in a white t-shirt and gray shorts that stopped just above his knees.

He walked in comfortable-looking black sneakers and pulled a baseball cap with the NBA symbol in the middle low over his eyes and looked dashing as ever.

The Shutter Island star was spotted riding a Citi Bike through the streets which came just a couple days after news broke that he’s romantically interested in 27-year-old model Gigi Hadid.

Leo does have his sights set on Gigi, but she hasn’t shown an interest,’ according to a report from Us Weekly on Wednesday, September 7.

They’re friends, but she doesn’t want to be romantic with [him] right now.’

The insider also added that although the star has ‘his sights’ on the mother-of-one, she ‘doesn’t have her sights on him.’

The two seem to have run in similar social circles over the years as back in December 2019, Us Weekly reported that Leo and Gigi partied together at an Art Basel Miami afterparty alongside Kendall Jenner and Gigi’s sister Bella Hadid.