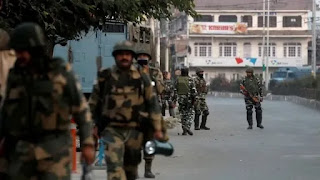 SRINAGAR: (Daily AMV Tribune) After the death of Syed Ali Gilani, a senior resistance leader who dominated the political scene in Kashmir for five decades, Indian authorities arranged for his burial under tight security, with only a few close relatives allowed to attend:

He was 92 years old and had been ill for a long time. On the other hand, according to the BBC’s Riaz Masroor in Srinagar, all movement in the valley has been banned. He said that although the funeral of the Hurriyat leader was held in the morning, people from many parts of Kashmir wanted to attend but were not allowed to go there.

Our colleague Shafaat Farooq said that in the urban areas of Srinagar. The movement of people is being monitored by drones and helicopters. A tight security cordon has been set up outside Syed Ali Gilani’s residence in Haiderpura.

Police had said yesterday that due to the Corona epidemic, only close relatives would be allowed to attend the funeral. Photo source GETTY IMAGES Two sons, their wives and children were present and the deceased was buried in a cemetery in Haiderpura. Earlier, in a video statement released on social media by Syed Ali Gilani’s spokesman Abdullah Gilani. It has been claimed that the authorities have forcibly taken the body of the late Hurriyat leader for burial even before the bath.

From the same Twitter account, his spokesman said that the family of Syed Ali Gilani and Tensions have also risen among military personnel. Kashmiri leaders have also called for protests over the alleged mistreatment of officials, but Indian authorities have imposed a curfew in the valley to avoid tensions. What happened after Gilani’s death? Authorities in the valley Roads leading to Syed Ali Gilani’s residence in Srinagar have been cordoned off and barbed wire has been set up, according to AFP. He will not be allowed to leave his home.

According to AFP, the announcement of Syed Ali Gilani’s death was made through the loudspeaker of a nearby mosque and people were asked to march towards his residence. Large numbers of armored vehicles can be seen on the main highways of India and thousands of law enforcement personnel are also present there. Syed Ali Gilani Remained the head of a faction of Last year, however, he withdrew from the Hurriyat Conference, but in his message, he made it clear: He was considered to be a staunch politician in Kashmir politics and he was a staunch supporter of giving Kashmiris the right to self-determination.

Ali Gilani He went to prison and spent almost a decade of his life in prison. He has three daughters and two sons. The death of Syed Ali Gilani is being mourned by various quarters and politicians and the people are paying homage to him. Former Chief Minister Mehbooba Mufti in her tweet praised Syed Ali Gilani’s perseverance and said that he always stood by his principles. She said that he and his colleagues though do not agree with Ali Gilani on most things.