Attack kills 50, including 40 soldiers, 5 Russian planes and a helicopter destroyed in retaliation

by News Desk
in Latest, Top Stories
Reading Time: 3 mins read
A A
0
0
SHARES
Share on FacebookShare on Twitter 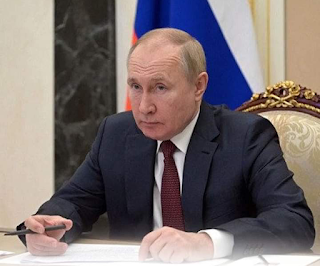 After the announcement of the military operation in Ukraine by the Russian President, many areas resounded with explosions

Attack kills 50, including 40 soldiers, 5 Russian planes and a helicopter destroyed in retaliation.

Srinagar, [Jammu Kashmir]  February, 24 (Azadi Times): The Russian president Vladimir Putin, announced on Thursday that it would launch a military operation in Ukraine to “protect Russian citizens.” Ukraine claimed to have destroyed five Russian planes and a helicopter in retaliation. Martial law has been imposed in the country after the attacks.

According to CNI Monitoring, Russian President Vladimir Putin announced on Thursday that he would launch a military operation in Ukraine to “protect Russian citizens.” The move comes in response to threats from Ukraine. He said Russia’s goal was not to occupy Ukraine. Russian President Vladimir Putin has blamed the Ukrainian government for the massacre.

Putin warned other countries that any attempt to interfere in Russia’s operations would be met with a response that no one had seen before. After the speech, the Ukrainian government announced the implementation of martial law in the country. In his speech, Ukrainian President Vladimir Zelensky assured the nation that “Ukraine will surely win.” The Russian president called on the Ukrainian army to immediately lay down its arms and return home. He said Russia did not intend to occupy Ukraine, but that the attack was necessary to protect the civilian population in eastern Ukraine. Russia’s demand for a NATO alliance was ignored. Immediately after Russia’s announcement, explosions were heard in the Ukrainian capital, Kiev, and other cities.

A statement from the Ukrainian presidency said that 40 soldiers and 10 civilians had been killed so far in the Russian attack. Ukraine has claimed responsibility for destroying five Russian planes and a helicopter in retaliation. Troops have entered various parts of Ukraine, destroying Ukraine’s air defense system.

The capital, Kiev, was rocked by bombings. Ukrainian Foreign Minister Dmitry Caliba said in a tweet that Russian President Vladimir Putin had attacked Ukraine with full force. It is time to take practical steps. We will defend our country at all costs and we will succeed. The Russian military has also fired missiles at Ukrainian military bases. Meanwhile, US President Joe Biden said in a statement that the United States and its allies had “unilaterally and decisively attacked Russia without justification and without provocation.” President Biden said in a tweet that he had spoken with Ukrainian President Zelensky, during which he condemned the Russian attack. Afterwards, he plans to address the nation on Thursday.

British Prime Minister Boris Johnson said in a tweet that President Putin had chosen a path of assassination and destruction by invading Ukraine. His allies will respond decisively. Pakistan’s ambassador to Ukraine, Dr. Noel Khokhar, said in a Twitter message: “I urge all Pakistani students in Ukraine to stay and study at their universities. “If the situation changes, we have made all the arrangements and will inform you in advance,” he added.

UN should implement approved resolutions to resolve the Kashmir dispute

20 people died due to lightning in India