After the death of a militant, the forces ended the Kamir Bazaar operation and restored traffic on the highway 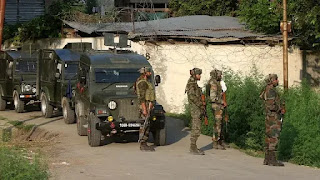 SRINAGAR:- A battle in Malapura Mirbazar area of Qazigund in southern district Kulgam, which started yesterday afternoon, ended on Friday with the death of a militant:

According to police, the forces operation in Mir Bazaar has ended and the highway has been restored for traffic. Referring to IGP Kashmir Vijay Kumar, the police tweeted, “Kulgam Mir Bazaar operation has come to an end. “A major tragedy has been averted on the national highway before Independence Day. The highway is being restored to traffic.” Earlier, in a tweet, the police reported that a militant was killed during the Mir Bazaar operation, but did not say anything about the identity of the militant.