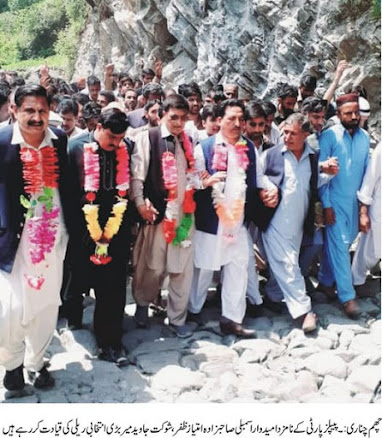 Cham, Chinari AJK June 8, (SAMMT) Demonstration of full political strength in constituency seven under the auspices of Pakistan Peoples Party Azad Kashmir, the first grand election rally, the thousands of people came, the nominee for the Assembly Sahibzada Imtiaz Zafar, throwing bhangras to the beat of the drum.
Shaukat Javed Mir, Syed Shafiq Kazmi, Nasir Chak, Junaid Kazmi, Zahir Hamdani, Hasnain Kazmi, Raja Safir on their arrival at Chham. On the occasion of the visit of the PPP leaders, more than 30 personalities resigned from the PTI, PML-N and announced their support for the PPP nominee and sang regional songs in celebration of the successful rally. At the end of the rally, a public gathering was held at the end of the rally with the slogans of Jai Bhutto Jai Benazir, Jai Faryal, Jai Bilawal Bhutto,  Ishaq Zafar, and Jai Latif Akbar.
Addressing the gathering, Sahibzada Imtiaz Zafar, nominee for Constituency 7 Lipa Valley, said that Pur In Azad Kashmir, the PPP will cross the Kohala Bridge to win over Kashmir vendors and enemies of the people by achieving a landslide victory.
The PML-N government has resorted to looting, revenge, violation of merit, communalism, and commission-eating. No, PTI and PML-N are a bunch of losers and incompetents, victory is the fate of PPP, Prime Minister Raja Farooq Haider Khan will be defeated in both constituencies, Dewan Chughtai is not in competition. Media Advisor Shaukat Javed Mir said that from Bhimber to Lipa, people should start preparations for the reception of Fakhr-e-Pakistan Bilawal Bhutto Zardari, Mohtarma Faryal Talpur, the city is getting old and is rotting and cashing a World Cup. It will be a shield for the outdated forces and a shield for democracy.
If a people’s mandate is stolen in Azad Kashmir like in Gilgit-Baltistan, the election results will not be accepted. (Alibaba Chalis Chor) chase away. Syed Shafiq Kazmi, Junaid Kazmi, Nasir Chak, Hasnain Kazmi, Zahir Hamdani, Raja Safir, Syed Yasin Shah, Saqib Chaudhry Addressing the gathering, Renee said that Sahibzada Ishaq Zafar’s services would make Imtiaz Zafar successful by voting for him. At the end of the meeting, a sumptuous lunch was also given in honor of the guests.