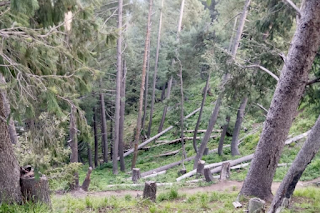 CHINARI: AZADI TIMES- (Special Report) DFO Muzaffarabad, Jhelum Valley’s open holiday under the supervision of his real brother Block Officer, national forests are being cleared. There was a wave of grief and anger in the public circles. Demand for taking notice from the Prime Minister, Minister for Forests Azad Jammu and Kashmir Chief Secretary and other officials.

According to the details, In order to show their performance in front of the authorities, they are seen taking action against deforestation in certain areas. In most areas of Jhelum Valley, they do not see any major action against the killers of national forests.

The IDFO has misused its powers to give additional charge to its real brother Javed along with Forest Department Sawan Depot as well as Forest Officer of Khatai Block under his supervision. Pine, coil and fur trees in the national forests of DFO Muzaffarabad, Jhelum Valley are silent spectators on illegal deforestation of Chham, Doba and other areas.

Apart from this, reports of illegal deforestation are also being received in the adjoining forests of Chakar, Salmiya, Chinari, Chakoti and Gujar Bandi. Public, political and social circles have strongly condemned the non-implementation of DFO’s action against forest killers in certain areas and silence in Khatai block to show their efficiency in front of higher authorities.

The Prime Minister, Minister for Forests, Chief Secretary, Secretary Forests and other officials have been asked to take notice.

According to the videos and photos sent to journalists by the locals, Legal cuts cost the national exchequer millions of rupees daily Have to pick up

The CEO of the international pharmaceutical company Pfizer became a victim...