Pakistan: PTM organised jalsa regarding the problems faced by Pashtuns in Sindh and Balochistan 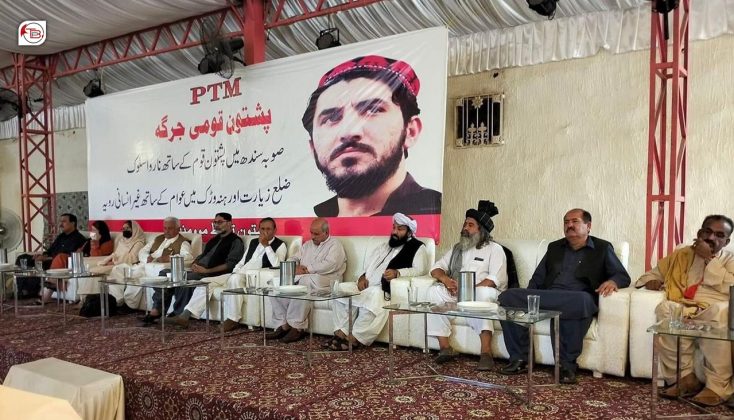 Pashtun Tahfuz Movement (Protection Movement) organized a meeting called “Pashtun Qaumi Jirga” in Quetta, the capital city of Balochistan, regarding the problems faced by Pashtuns in Sindh and Balochistan:

Discussed the topics, the first topic of the agenda of the Jirga is the violence against the Pashtuns living in Sindh and the second topic is the alleged persecution of the Pashtuns in Ziarat and Hana Orak in Balochistan. People with different political views, businessmen and workers in the Jirga. Politician Aurangzeb Kasi said in his speech that committees should be formed for the protection of Pashtuns living in other cities of Pakistan.

According to him, the work of the committees should be to ensure the protection of Pashtuns in incidents like the recent violence in Sindh. Haji Nasruddin, a member of Anjaman Tajran, said in his address to the Jirga that Pashtuns are living in Sindh only for labor and earning a living. Another businessman, Qayyum Agha, said there had been a clash between two men in Hyderabad, Sindh, and it was not appropriate that the reaction was “so widespread”. pointed to the violence that spread to many Pashtun-populated areas of Balochistan.

On July 14, there were protests and riots in Sindh capital Karachi, Hyderabad, Kashmore and many other places. It happened after a clash in a restaurant near the road in which a Sindhi citizen Bilal Kaka was killed.

According to the police, the clash took place over non-payment of the food bill and the owner of the restaurant is a Pashtun. The police say that they have arrested a Pashtun named Shah Sawar for killing. After this incident, people in many cities of Sindh forcibly closed Pashtun tea houses and restaurants, many such videos were published on social media. In some districts of Sindh, young Pashtuns go to shops and restaurants and request them to close down immediately and stop doing business there. Sindh Police says that they have 14 More than 60 people have been arrested in connection with the July protests and damage to people’s property. 40 of them have been arrested from Karachi’s Sohrab Goth area.

A member of the Pashtun Protection Movement, speaking on a different topic in his address to the Jirga, added that people in Harnai, a Pashtun-populated area of Balochistan, were also arrested. There are problems. He said that in the past only people in uniform came to him and collected taxes from them, and now, according to him, “people in uniform come during the day and people in plain clothes at night”. and demand taxes from them.

He said that there are no armed or separatist groups present or working in Harnai and Ziarat, but according to them, their own government is behind all this. The force said in a statement that the Baloch freedom fighters kidnapped and killed an army colonel in Ziarat and in response they were conducting a search operation and killed two militants.

On July 14, the BLA In another statement sent to the media, he said that he took the army officer with him from Ziarat area of Balochistan on July 12 and later executed him.

Why was DG Lohia murdered, accused Yasir disclosed this, was hurt...