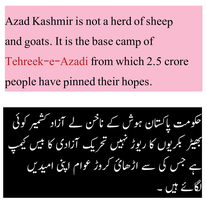 Talks are being held between Pakistan and the Government of India. The Chiefs of the Armed Forces of the two countries have met several times. The DGMOs have also met several times. We also saw the secret meetings of these two Chiefs of Army in UAE. The country is trying to solve the Kashmir issue together. We expect this from the civilized countries of the world. They will see the hypocrisy of both of them and they will solve this problem in accordance with the UN resolutions. The people of Kashmir are also now realizing that the government of Pakistan has been hoping for more than 75 years, but when the result came, Gilgit-Baltistan, Azad Kashmir become the province of Pakistan. It is the firm policy of the government f Pakistan to end the Jammu Kashmir issue in some way and to put Pakistan on the path of development by ending this issue. If this happens then is there a bloody line in Jammu and Kashmir which the world calls the Line of Control? The millions of people living around the (LOC) Line Of Control are still waiting for the day when one day this line will end And we are living our lives in the hope that we will go and meet our loved ones who sacrificed their children and children in this hope today if they find out that this bloody line has become the International Line of Control. What will happen to their hearts?