Swiatake, Jabour to clash in US Open final 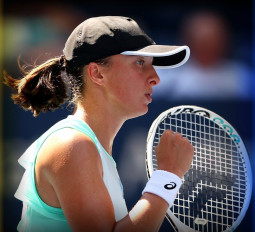 Digital Desk, New York. World No. 1 and two-time Roland Garros champion Iga Swiatek of Poland made a stunning comeback from a 2-4 loss in the third set to beat Aryna Sabalenka of Belarus to reach the final of the US Open for the first time in her career on Friday. . Swiatek will face fifth seed Tunisia’s Ons Jabour in Saturday’s final.

The Tunisian beat 17th seed Caroline Garcia of France 6-1, 6-3 to become the first player since Serena Williams in 2019 to reach the finals of Wimbledon and the US Open in the same season.

Svyatek defeated Sabalenka 3-6, 6-1, 6-4 in two hours and 11 minutes. “I felt a huge difference between the first set and the last two,” Svyatek was quoted as saying by the WTA after the match. I am very happy that I have stepped up my game. “Definitely Aryan played a better game today. I felt like she was doing great service.

It was tough to come back in the third set, but I am very happy that I did well. Swiatek had never reached the quarterfinals at Flushing Meadows before this season. She has reached the third Grand Slam final of her career, her second of the year and her first since the French Open. She holds a 2-0 record in Grand Slam finals in her career.

She won in Paris in 2020 and earlier this year. Swiatek and Jabour have shared honors in the four matches they have played against each other, and are tied in a 1-1 win on hard courts. In their only match this season, Sviatec easily defeated the Tunisians in the Rome final.

It was Sabalenka’s third close defeat in a Grand Slam semi-final. The Belarusian had crashed out of the last-four stages at the 2021 Wimbledon and the 2021 US Open. Jabour beat García in just 66 minutes, putting up eight Aces and 21 Winners in his win. Jabour said, it was a very important match.

Garcia was putting a lot of pressure on my second serve on the court. I am really happy that I got the win in the end, otherwise it would have been really difficult to win the match. Jabour has reached the last-four in her last two Grand Slam appearances, after never reaching this level in her first 20 majors.