On the 5th day, normalcy was restored in the valley. Mobile internet service restored in 8 districts, closed in 2 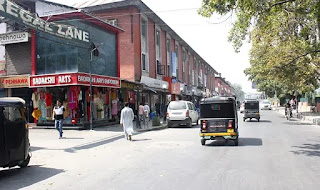 Simultaneous mobile internet services were restored in 4 districts of South Kashmir, Ganderbal of Central Kashmir and 3 districts of North Kashmir. Officials say the facilities in Srinagar and Budgam districts are likely to be restored by Tuesday evening. However, in order to maintain law and order, the authorities blocked the roads leading to Haiderpura and Eid Gah and tightened security in the area.

Drones were also being used. Mobile internet services in the valley continued on Monday On the fifth day, Kashmir train service will be suspended for the rest of the day. Roads leading to the shrine were closed on Monday and more security personnel were deployed.

Barbed wire was also laid on the roads in several places. Shops were open in other parts of the city, including the markets in the commercial hub of Lalchok, while road transport continued. In some parts of the city, the bazaars were closed in the morning, but the shops gradually reopened. No restrictions were imposed anywhere in the city. Continue as usual.

The bazaars of the town remained open while the traffic on the roads continued as usual. Normal life was restored in other districts and tehsils of North Kashmir as well. Trade activities were also resumed in all the districts of South Kashmir on Monday. In Budgam district of central Kashmir, although the bazaar remained closed on Monday morning, shops reopened later and road transport continued. Meanwhile, mobile internet and rail services in the valley continued on Monday.

Although the mobile calling (voice) services in the valley have been restored, the mobile internet services remained closed for the fifth consecutive day on Monday, causing various difficulties to students, traders and other professionals.