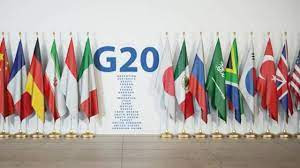 Dehli (Azadi Times): Former Indian minister and BJP leader Brahman Swamy has claimed that the G20 summit of the world’s 20 largest economies should be held in New Delhi instead of Srinagar over objections from China and Pakistan:

Subramanian Swamy said in a tweet that the Modi government is ready to hold the G20 summit. In his tweet, Swamy wrote that it had been announced earlier that it would be held in Jammu and Kashmir. After that China and Pakistan made noise and now it has been decided to hold this meeting in Delhi. Probably in the field of progress. 54-inch chest.

The BBC asked Subramanian Swamy if he had received any information from the government that the G20 summit would not be held in Jammu and Kashmir.

In response, Swamy told the BBC that he had received many reports that the conference would be held in Delhi. I can say that this progress will be in the field. It may be recalled that the Indian government had announced to hold the G20 summit in Occupied Kashmir. There will be an international conference.

On August 5, 2019, the Modi government abolished the special status of Jammu and Kashmir and divided it into two Centrally Administered Territories. The G20 is an organization of the world’s 20 largest economies. These 20 countries account for 80% of global GDP