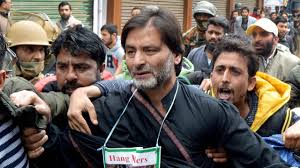 Azadi Times: JKLF’s cheif Yasin Malik undergo hunger strike for a fair trail JKLF in solidarity from July 21st will hold three day hunger strike camps in and outside the State proposed 5th August Ceasefire Line March program has been deferred. However, the mass political campaign and reorganization process in its preparation shall continue:

On local body elections an analytical committee led by Sajid Siddiqi has been formed to devise a report.

The non-political and uncalled for statements contrary to

history and facts, and immoral actions of AJK Government were condemned in

strong words besides taking some important decisions in the JKLF Supreme

The house condoled Sabir Gul, Abdul Majeed Butt and Noman Kashmiri on the demise of their mother, sister and uncle respectively and prayed for the highest place in Jannah for the deceased. // Stated JKLF Chief Spokesman.

According to the statement issued to the media from the central information office of the JKLF, a detailed assessment report based on facts over the Asseer-e-Wahdat Long March, held by JKLF against Indian judicial terrorism and criminal silence of international community, especially the UN, that was met with brute force by Muzaffarabd administration was presented in the meeting of the Supreme Council. This long march was announced by JKLF after its party chairman Muhammad Yasin Malik on 25th May was unfairly sentenced to life imprisonment by Indian special court at New Delhi. The peaceful long march started from Bhimber in the morning of 26th June and upon reaching Muzaffarabad on the evening of June 27th was unprovokedly dispersed with the use of force by Muzaffarabad administration in the midnight between 27 and 28th June. While expressing their satisfaction on the report all the participants of the meeting declared the long march as a success and once again strongly condemned the use of police force by the government of AJK and Muzaffarabad administration that resulted in injuries to dozens of peaceful protesters and arrest of around 150 party leaders and workers. The participants of the meeting praised and paid rich tributes to all the active office bearers and workers of the party for rendering sacrifices and working tirelessly in making this long march a success.

While giving details of the meeting, the central spokesperson of the party, Muhammad Rafiq Dar said that the participants of the meeting condemned the unfair judicial hearing in all the fictitious and fabricated cases filed by the Government of India against Muhammad Yasin Malik and termed the non-presentation of him in the courts as illegal, inhumane and undemocratic. He said that for this reason, Muhammad Yasin Malik has decided to undergo hunger strike from July 22 in Tihar Jail with demands such as a fair hearing and his physical presence in the court.

According to the party spokesman, Yasin Malik has informed the Government of India through a letter sent through the jail authorities. This was revealed by Yasin Malik on July 13 before the learned judge during his online appearance from Tihar jail in Airforce Case that he has written to Government of India that if his just and legal demands of fair trial and personal presentation in the courts are not accepted then he has no other option but to go for a hunger strike in the jail.

According to the spokesman, it is worth mentioning here that Muhammad Yasin Malik had actually decided to start the hunger strike from July 12, a day before the last court hearing on July 13, which he postponed for 10 days on the request of jail authorities for them to have some time to take up the issue with the higher authorities and the government.

According to the spokesman, it was unanimously decided in the meeting of the Supreme Council that as an expression of solidarity with Muhammad Yasin Malik, JKLF besides Islamabad, Lahore and Karachi will hold token hunger strike camps in AJK and Gilgit-Baltistan on 21st, 22nd and 23rd July. In addition to its symbolic protest hunger strike camps shall also be organized around the world, especially in important power centers like London (UK), Brussels (Europe) and New York (USA). However, the Acting Chairman Raja Haq Nawaz Khan and Vice Chairman Salim Haroon of JKLF will jointly lead the three day hunger strike camp outside National Press Club Islamabad starting from 21st July.

According to the spokesman, the meeting participants unanimously decided to postpone the proposed August 5 ceasefire line crossing program for the time being in view of the prevailing situation. However, in order to use this initiative as a last option at the decisive stage, it was decided to continue the public political campaign and to make the process of reorganization more extensive and faster in order to use it with full national unity and power.

According to the spokesman, despite the differences of opinion among the meeting participants on the subject of local body elections in Azad Kashmir, after a fruitful discussion an election analysis committee was formed under the leadership of Sajid Siddiqui, president of Azad Kashmir Gilgit-Baltistan Zone, which will analyze the ground realities to present a detailed report in the next meeting of the Supreme Council based on the needs of the system, movement and organization, and party position followed by their recommendations. Member Supreme Council Azam Zia, Chairman SLF Abdul Rahim Malik Advocate, Zonal General Secretary Sardar Arbab Advocate, Zonal Chief Organizer Babar Shakur, Member Zonal Working Committee Dr. Liaqat Naqshbandi, District President Poonch Haji Ibrahim and Member Zonal Working Committee Raja Sulaiman will be the members of the committee.

According to the spokesperson, the meeting strongly condemned the government of Azad Kashmir, especially the Prime Minister for irresponsible, non-political and undemocratic statements issued by him in the recent past that are contrary to the history and facts. The meeting also condemned the government’s attitude of filing cases against public representatives and ordinary people who were peacefully protesting for the restoration of their basic human rights and needs. Instead of solving the daily public problems like water and inflation, and instead of listening to public problems with tolerance and taking steps towards their resolution, the government behaved indifferently with the common people and labeled them as anti nationals, which is unacceptable. The participants demanded early and unconditional revocation of cases filed against all the peaceful protesters.

The spokesman said that the current government of AJK seems to be unaware about the sacrifices laid down by the father of the nation Muhammad Maqbool Butt, the relentless struggle of Quaid-e-Tehreek Amanullah Khan late, Quaid-e-Inqlab Muhammad Yasin Malik’s role and above all it seems to be totally ignorant about the sacrifices of thousands of JKLF leaders and members in the freedom struggle. He advised the government of Azad Kashmir, especially the PM, to exercise caution and avoid making nonsense, frivolous and illogical statements.

The meeting condoled Sabir Gul (the central chief organizer of JKLF from United Kingdom), Abdul Majeed Butt (central leader and member of the Supreme Council) and Noman Kashmiri (the senior activist of the party from Mandhol Azad Kashmir) on the demise of their mother, sister and uncle respectively. Participants also prayed for forgiveness and paradise for all the deceased and patience and peace for the bereaved.