What is the problem of Afghan cricket with Pakistan, Sami Chaudhry’s column – BBC News Urdu 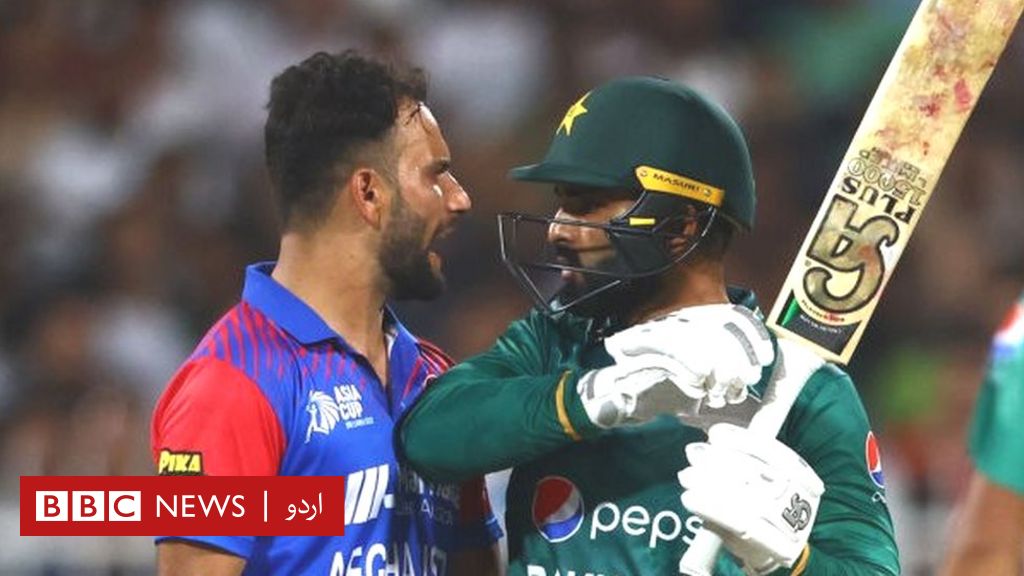 Kolkata’s Eden Gardens is the oldest cricket stadium in the region. The attachment of Indian cricket fans to this stadium, which was built 150 years ago, is so strong that it has been symbolically called the ‘Mecca of Indian Cricket’.

But on March 13, 1996, in the World Cup semi-final, when Santh Jayasuriya dismissed Sachin Tendulkar and left the Indian batting line helpless, in a few moments this stadium, considered the holiest place for Indian cricket, went up in flames. Seen in the wrap of.

After the defeat in the quarter-finals just two days ago, Pakistan captain Amir Sohail wished India to reach the final and win the title. While the effigies of Wasim Akram were burnt in Lahore after the defeat in the quarter-finals, in the semi-finals, after losing six wickets for just 22 runs, the Indian fans not only threw bottles on the ground and made Vinod Kamble cry, but also some of the stadium. The parts were also burnt.

Referee Clive Lloyd tried to take over the match but eventually Sri Lanka was declared the winner before the match was completed and the situation became so uncontrollable that it became necessary to provide state security to captain Azharuddin’s house.

The new generation of cricket fans, who are not familiar with this history, were very surprised at the situation after the Pak-Afghan match at the Sharjah Cricket Stadium in recent days, but in cricket matches, when two traditional rivals are competing or a title is at stake, the spectators It is not so surprising that such riots broke out among

In football matches, we have seen more serious things than these incidents.

But when such a fight is devoid of any context, the question must arise that what happened? Because there is a history of political rivalry between India and Pakistan, and it is understandable to see such reactions in India-Pakistan matches, but what historical rivalry between Pakistan and Afghanistan has become such that Afghan fans started throwing chairs at Pakistani fans?

And when the historical facts are kept in mind that the Pakistan Cricket Board has actually nurtured Afghan cricket with its own hands, the confusion increases a bit more. Afghanistan’s first coach was former Pakistani cricketer Kabir Khan, under whose coaching Afghanistan qualified for three world events. Then it was former Pakistani cricketer Inzamam-ul-Haq under whose coaching Afghanistan won the first ODI series against Zimbabwe.

In 2013, when the Afghanistan Cricket Board was short of funds and finding it difficult to maintain its home ground in Sharjah, Pakistan opened the doors of the National Cricket Academy to them. Not only this, but also provided ample facilities for the preparation of U-19 Asia Cup.

This bilateral relationship was becoming an example and the head of the Afghan Cricket Board, Shafiq Statankzai, never gets tired of the PCB’s favors.

But when Afghan cricket began to gain an identity, coincidentally, it was at the same time that the Big Three alliance was emerging in the ICC and the BCCI was under fire for favoring associate teams. was So, Srinivasan’s heirs adopted Afghan cricket at the same time which helped the Indian Cricket Board to develop a soft image worldwide.

The doors of IPL were opened for Afghan cricketers. Then a ground in Greater Noida was handed over to Afghan cricket, then the stadium in Dehra Dun also became Afghanistan’s home ground. At the same time, the Indian Cricket Board also decided that the team that will visit India will also play a match against Afghanistan.

This partnership was so strong that later, when Narendra Modi’s government started investing extensively in Afghanistan, the construction of cricket stadiums in Kandahar and Mazar-e-Sharif was also announced.

But despite all this, the relationship of Afghan cricketers with Pakistan did not end. Many of them also had Pakistani citizenship. Some families were living in Pakistan and some were connected to Pakistan through marriage.

Pakistan-Afghanistan cricket relations were flourishing to such an extent that the governments of Pakistan and Afghanistan had even arranged a bilateral cricket series, one part of which was to be played in Lahore and the other in Kabul. And thus Afghanistan was to get the honor of hosting the world cricket for the first time under PCB’s guidance.

But then 31st May 2017 came and Pak-Afghan cricket relations changed forever.

Although the morning of 31st May 2017 was the beginning of a normal day for the citizens of Kabul and the hustle and bustle of the beginning of business life continued as usual, suddenly a car loaded with explosives in the diplomatic quarters approached the German Embassy and then The explosion took place as a result of which around 150 people died and more than 200 were injured.

As soon as the explosion took place, the Taliban clarified that it had nothing to do with the incident. Shortly after, a denial was also issued by the extremist organization, the so-called Islamic State.

Then came the Afghan intelligence report that blamed the Haqqani network for the blast and the Afghan government blamed it on the ISI, but Pakistani authorities linked it to the Indian intelligence agency RAW.

But whatever the blame, before sunrise the next morning, the Afghanistan Cricket Board had decided that all cricketing ties with Pakistan would be cancelled.

In an announcement made the next day, ACB’s media director called Pakistan a sponsor of terrorism and canceled the friendly series to be played in Lahore, Kabul.

He also ordered his cricketers to sever all ties with Pakistan within two months. Due to non-implementation, many people were left out of the team and Asghar Stanakzai even had to change his name.

In the context of the same incidents, Afghanistan’s scheduled opening Test match against Pakistan was also shifted to India.

It is still not clear who was behind the Kabul blast, but it is a fact that just as the Mumbai attacks changed the direction of Pakistan-India relations, the Kabul blast also changed the direction of Pakistan-Afghan cricket relations. Afghan cricket, which has always been suffocated by PCB’s favors, has reached the level of bilateral rivalry where Pakistan India cricket had to travel decades to reach.

For the 2019 World Cup, when Afghanistan got the sponsorship of an Indian brand, then after the Pakistan-Afghanistan match in Leeds, a similar situation was seen as was seen in the Sharjah Cricket Stadium a few days ago. And now this fight has reached such a level that it is making headlines in the mainstream media around the world.

Although Garbaz, Zazai, Rashid, Mujeeb and Nabi are still very friendly with the Pakistani players and regularly participate in the PSL, the narrative based on the post-Kabul blasts has taken root in the hearts of Afghan fans. was lying

There are numerous Afghan settlements in most cities of Pakistan and they interact with Pakistanis the same way as all other Pakistanis, but a section of Afghan cricket fans have completely bought into the narrative promoted by Narendra Modi. The government of Ashraf Ghani, who wanted good relations with