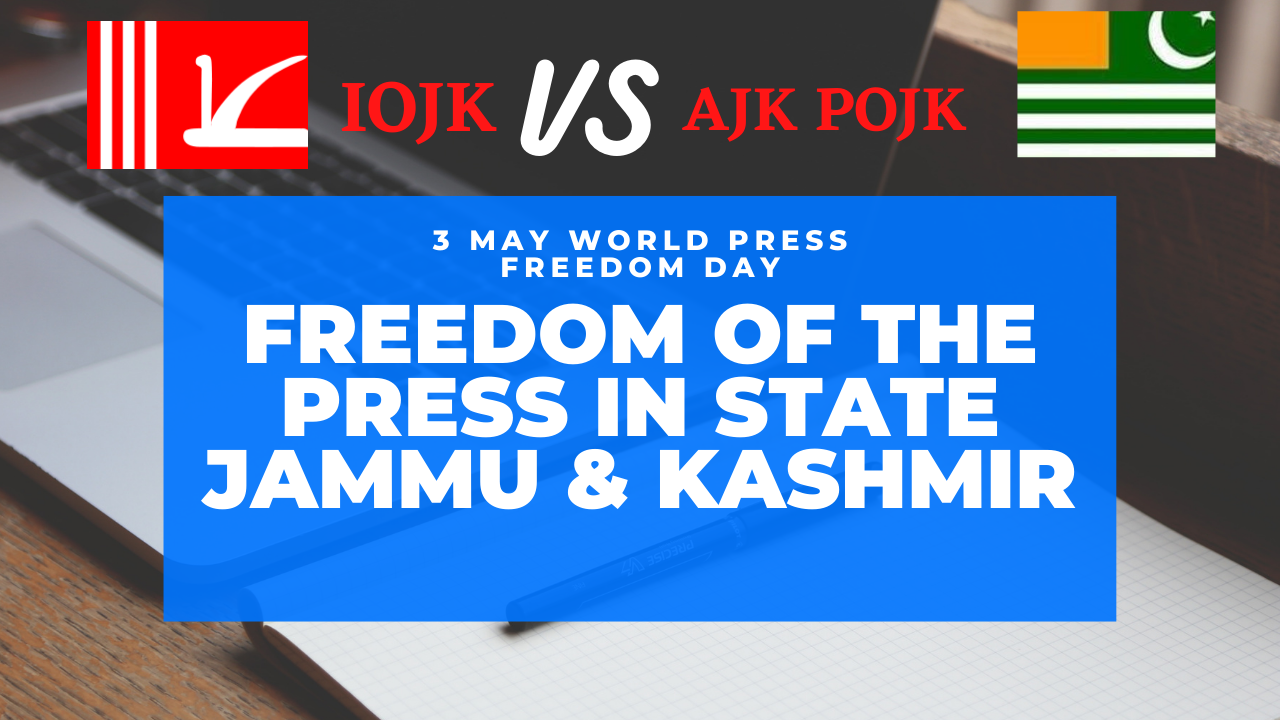 May 3 is celebrated all over the world as World Press Freedom Day. I will talk to you today about the Freedom of the Press in Jammu and Kashmir. As you all know, Jammu and Kashmir is a disputed state for the last seventy-five years. India, Pakistan, and China are governing different areas.

Freedom of the Press in Indian-administered Jammu and Kashmir:

The territory of the Indian-administered state of Jammu and Kashmir, which includes Ladakh, Jammu, and Kashmir Valley, where the standard of media freedom is the same as that of Pakistan-occupied Kashmir, is a little higher here because The quality of electronic media is a bit better here where there are some channels that are doing journalism above international standards like Greater Kashmir The Kashmir Wala Kashmir Observer and Kashmir Life in Channels that network has those facilities. They have built their network, but they are also facing government restrictions. They can’t talk about the problems of the people there completely free because they have to get approval from the governments. Can’t write against Government officials can’t write any news and they are allowed by the government to continue their work but under certain conditions, they will do what the government tells them to do and what they will do The Indian government will allow them to do so. The channels that are there talk about a lot of public issues. But the media will never be able to show them that it faces innumerable restrictions on the channels therein Ladakh. There are channels that talk about the problems of the whole region and you have covered the scope of journalism for the whole week. There are some channels that have been banned by the Indian government and their offices have been sealed.

Freedom and quality of media in Pakistan-administered Kashmir (Azad Kashmir):

The biggest source of media in Pakistan-administered Jammu and Kashmir (Azad Kashmir) is the newspaper even in the present era. There is still print media there. People go to read the newspaper either by the Azad Jammu and Kashmir governments or by the government of Pakistan. There is no TV channel that is a state channel and I broadcast on state issues. It is not that there is no TV channel in Pakistan-administered Azad Jammu and Kashmir or there are no TV channels. There is no such thing. There are also channels but the channels that are running on them are not talking about the issues of Azad Kashmir but talking about Pakistan, India, and other countries and they also have control over these channels.

Apart from this, there are some small Facebook and YouTube channels in Pakistan-administered Jammu and Kashmir, also known as Azad Kashmir, which some fifteen or twenty thousand subscribers subscribe to on YouTube. Is not talked about but most of the news is either international or it has to do with the news that Pakistan is facing a lot of sanctions that are towards the government level. Assume that the channel which will give the news which is a channel in Azad Kashmir which has fifteen or twenty thousand subscribers will not give even the news of this small region but it will give it to its own city. Will

Azad Kashmir Prime Minister Farooq Haider appeared in a video where a journalist goes to him and asks him questions and he immediately orders the journalist to do research on the spot. The video went viral but was later released by the Prime Minister. No statement was made and so it was said that no journalist here without the consent of the government representatives who are at the level of the oath at the level of Assistant Commissioner or District Commissioner level officers. No journalist can do open journalism without it and those journalists who do open journalism and are welcomed in the society, all the journalism of justice is in the interest of Pakistan or in any other country.

If we talk about media freedom in Gilgit-Baltistan, the situation is different here. Gilgit-Baltistan is a large area of the state of Jammu and Kashmir in which about two million people are living. Its population is very small. The mistake has been given some special concessions by the government of Pakistan because the trade between Pakistan and China by road is made of looted hardwood. Gilgit is also a major part of the C-Pack project of Pakistan and China. It starts from the land of Baltistan which is the area of Jammu and Kashmir and it was regularly mentioned within the Kashmir issue but the people of Gilgit Baltistan are busy changing the minds of the people of Gilgit Baltistan by the government of Pakistan. From those who are taking people away from the Kashmir issue and telling them the whole task of keeping away from them, I will give you the present example.